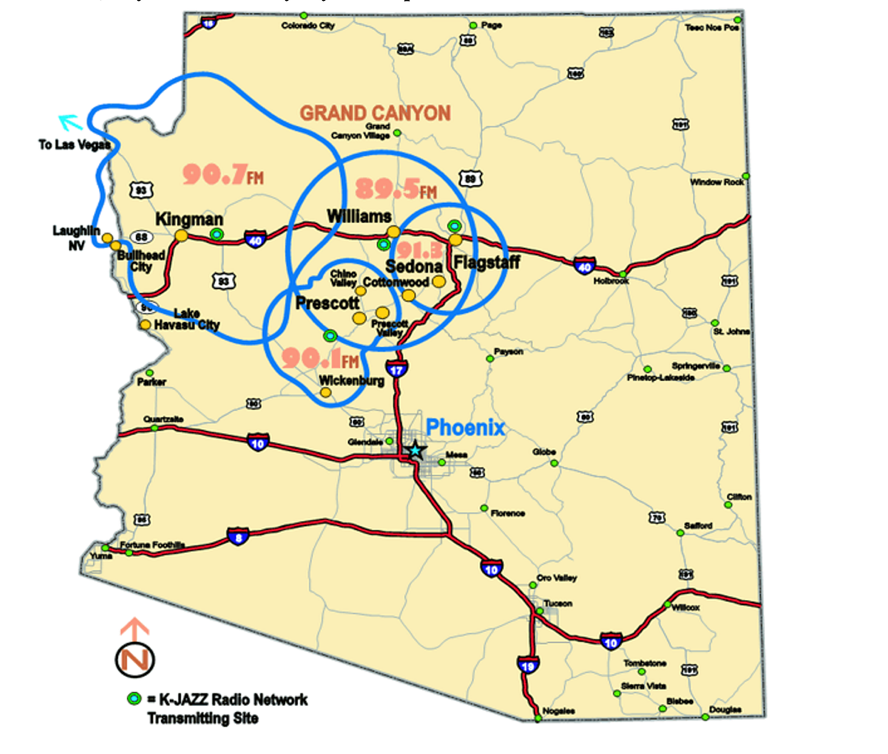 KJZA-FM, licensed to Drake, AZ, now operates at 250 watts, and has a CP to increase to 1,000 watts. The transmitting equipment is in place. A limited investment is required for two directional antennas. Based on available studies, the station’s output can be increased to 7,800 watts, increasing its coverage area.

KJZK-FM, licensed to Kingman, AZ, now operates at 30 watts from Hayden Park in the Hualapai Mountains, the highest peak in Mohave County. This recently constructed CP results in better coverage along the I-40 west corridor, into the Mohave Valley and in the Bullhead City/Laughlin area. Based on available studies the station’s power can be upgraded to 200 watts (with a directional antenna).

KJZP-FM, licensed to Prescott, AZ, now operates at 27 watts from a high-elevation at Mt. Francis near Prescott. The station serves Prescott, Prescott Valley and the outlying unincorporated areas of Yavapai County.  The station’s power can be upgraded to 3,000 watts.

K217EP is a 10-watt translator on Mt. Elden, serving Flagstaff and the I-17 corridor south toward Phoenix. An upgrade (to 250 watt) may be possible with a change in the antenna polarization.

K216GN is a 75-watt translator in Cave Creek, serving Metro Phoenix and the I-17 corridor north toward Flagstaff.